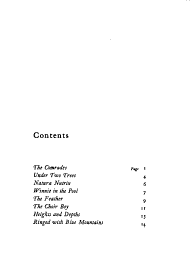 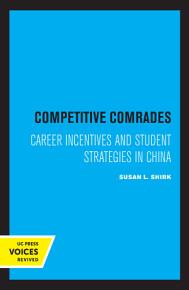 This title is part of UC Press's Voices Revived program, which commemorates University of California Press's mission to seek out and cultivate the brightest minds and give them voice, reach, and impact. Drawing on a backlist dating to 1893, Voices Revived makes high-quality, peer-reviewed scholarship accessible once again using print-on-demand technology. This title was originally published in 1982. 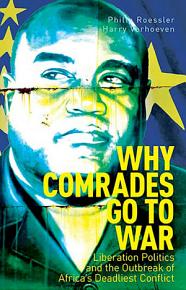 In October 1996, a group of ageing Marxists and unemployed youth coalesced to revolt against Mobutu Seso Seko, president of Zaire/Congo since 1965. Backed by a Rwanda-led regional coalition that drew support from Asmara to Luanda, the rebels of the AFDL marched over 1500 kilometers inseven months to crush the dictatorship. To the Congolese rebels and their Pan-Africanist allies, the vanquishing of the Mobutu regime represented nothing short of a "second independence" for Congo and Central Africa as a whole and the dawning of a new regional order of peace and security. Within fifteen months, however, Central Africa's "liberation peace" would collapse, triggering a cataclysmic fratricide between the heroes of the war against Mobutu and igniting the deadliest conflict since World War II. This book gives an account Africa's Great War. It argues that the seeds of Africa's Great War were sown in the revolutionary struggle against Mobutu- the way the revolution came together, the way it was organized, and, paradoxically, the very way it succeeded. In particular, the book argues that the overthrow of Mobutu proved a Pyrrhic victory because the protagonists ignored the philosophy of Julius Nyerere, the father of Africa's liberation movements: they put the gun before the unglamorous but essential task of building the domestic and regional political institutions and organizational structures necessary to consolidate peace after revolution. 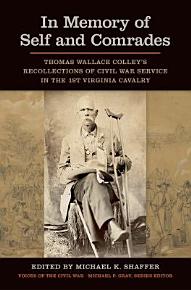 Thomas W. Colley served in one of the most active and famous units in the Civil War, the 1st Virginia Cavalry, which fought in battles in the Eastern Theater, from First Manassas/Bull Run to the defense of Petersburg. Colley was born November 11, 1837, outside Abingdon, Virginia, and grew up knowing the daily demands of life on a farm. In May 1861, along with the other members of the Washington Mounted Rifles, he left his home in Washington County and reported to camp in Richmond. During the war, Colley received wounds on three different occasions: first at Waterloo Bridge in 1862, again at Kelly's Ford in 1863, and finally at Haw's Shop in 1864. The engagement at Haw's Shop resulted in the amputation of his left foot, thereby ending his wartime service. The first modern scholarly edition of Colley's writings, In Memory of Self and Comrades dramatizes Colley's fate as a wounded soldier mustered out before the war's conclusion. Colley's postwar reflections on the war reveal his struggle to earn a living and maintain his integrity while remaining somewhat unreconciled to his condition. He found much of his solace through writing and sought to advance his education after the war. As one of an estimated 20,000 soldiers who underwent amputation during the Civil War, his memoirs reveal the challenges of living with what many might recognize today as post-traumatic stress disorder. Annotations from editor Michael K. Shaffer provide further context to Colley's colorful and insightful writings on both his own condition and the condition of other veterans also dealing with amputations. Book jacket. 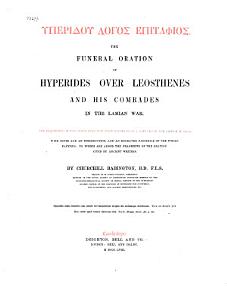 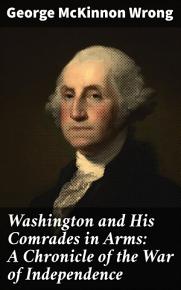 "Washington and His Comrades in Arms: A Chronicle of the War of Independence" by George McKinnon Wrong. Published by Good Press. Good Press publishes a wide range of titles that encompasses every genre. From well-known classics & literary fiction and non-fiction to forgotten−or yet undiscovered gems−of world literature, we issue the books that need to be read. Each Good Press edition has been meticulously edited and formatted to boost readability for all e-readers and devices. Our goal is to produce eBooks that are user-friendly and accessible to everyone in a high-quality digital format. 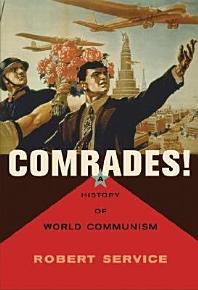 Almost two decades after the collapse of communism in Eastern Europe and the USSR, leading historian Robert Service examines the history of communism throughout the world. Comrades! moves from Marx and Lenin to Mao and Castro and beyond to trace communism from its beginnings to the present day. Offering vivid portraits of the protagonists and decisive events in communist history, Service looks not only at the high politics of communist regimes but also at the social conditions that led millions to support communism in so many countries. After outlining communism's origins with Marx and Engels and its first success with Lenin and the Russian Revolution in 1917, Service examines the Soviet bloc, long-lasting regimes like Yugoslavia and Cuba, the Chinese revolution, the spread of communism in Asia, Africa, and Latin America, and the international links among the hundreds of parties. He covers communism's organization and ideology as well as its general appeal. He looks at abortive communist revolutions and at the ineffectual parties in the United States and elsewhere. Service offers a human view of the story as well as a global analysis. His uncomfortable conclusion--and an important message for the twenty-first century--is that although communism in its original form is now dying or dead, the poverty and injustice that enabled its rise are still dangerously alive. Unsettling and compellingly written, Comrades! is the most comprehensive study of one of the most important movements of the modern world. 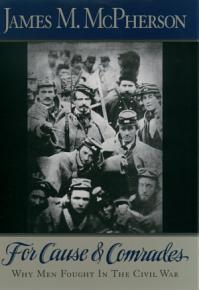 General John A. Wickham, commander of the famous 101st Airborne Division in the 1970s and subsequently Army Chief of Staff, once visited Antietam battlefield. Gazing at Bloody Lane where, in 1862, several Union assaults were brutally repulsed before they finally broke through, he marveled, "You couldn't get American soldiers today to make an attack like that." Why did those men risk certain death, over and over again, through countless bloody battles and four long, awful years ? Why did the conventional wisdom -- that soldiers become increasingly cynical and disillusioned as war progresses -- not hold true in the Civil War? It is to this question--why did they fight--that James McPherson, America's preeminent Civil War historian, now turns his attention. He shows that, contrary to what many scholars believe, the soldiers of the Civil War remained powerfully convinced of the ideals for which they fought throughout the conflict. Motivated by duty and honor, and often by religious faith, these men wrote frequently of their firm belief in the cause for which they fought: the principles of liberty, freedom, justice, and patriotism. Soldiers on both sides harkened back to the Founding Fathers, and the ideals of the American Revolution. They fought to defend their country, either the Union--"the best Government ever made"--or the Confederate states, where their very homes and families were under siege. And they fought to defend their honor and manhood. "I should not lik to go home with the name of a couhard," one Massachusetts private wrote, and another private from Ohio said, "My wife would sooner hear of my death than my disgrace." Even after three years of bloody battles, more than half of the Union soldiers reenlisted voluntarily. "While duty calls me here and my country demands my services I should be willing to make the sacrifice," one man wrote to his protesting parents. And another soldier said simply, "I still love my country." McPherson draws on more than 25,000 letters and nearly 250 private diaries from men on both sides. Civil War soldiers were among the most literate soldiers in history, and most of them wrote home frequently, as it was the only way for them to keep in touch with homes that many of them had left for the first time in their lives. Significantly, their letters were also uncensored by military authorities, and are uniquely frank in their criticism and detailed in their reports of marches and battles, relations between officers and men, political debates, and morale. For Cause and Comrades lets these soldiers tell their own stories in their own words to create an account that is both deeply moving and far truer than most books on war. Battle Cry of Freedom, McPherson's Pulitzer Prize-winning account of the Civil War, was a national bestseller that Hugh Brogan, in The New York Times, called "history writing of the highest order." For Cause and Comrades deserves similar accolades, as McPherson's masterful prose and the soldiers' own words combine to create both an important book on an often-overlooked aspect of our bloody Civil War, and a powerfully moving account of the men who fought it. 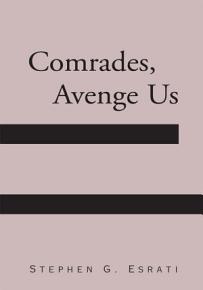 Maj. William Macnaughton of the Canadian army and Maj. John Bowles of O.S.S. lead a team into occupied Yugoslavia. Captured on Christmas 1944, the team's enlisted men are mercilessly beheaded while Bowles and Macnaughton are held as bargaining chips in case Germany loses the war. Tortured by the SS, and then liberated at the end of the war--Bowles and Macnaughton hunt for their captors across four continents to bring them to justice. The book delves into how the United States actually helped some Nazi war criminals escape, including the Nazi who helped put Neil Armstrong on the moon even though he had killed a bunch of GIs in an underground V-2 factory because one of them allegedly stole a loaf of bread. Other points of historical interest is the story of the attempt by Sen. Joseph R. McCarthy, R-Wis., to get all of the killers reponsible for the Malmdy Massacre off the hook. McCarthy claimed the U.S. Army obtained confessions by torturing the SS men by attacking their genitals. That charge turns out to be a lie. Bowles an all-American from Ohio and Macnaughton who becomes the last Canadian to be knighted organize a team to capture the perpetrators in a story of revenge in the page-turner thriller "Comrades, Avenge us." Reviews: by Edward J.Trout, a schoolteacher from Bristol, Pa. I read Stephen's Book in record time. Kudos to Mr. Esrati for a "great" read. It was one of those "rare books" that one wants to slow down when one nears the end. Well all readers of this genre know why. There are few authors who can carry the reader and accurate history in their narrative. Stephen's technique of having his characters narrate "mini-history lessons" on such a complex topic was a "sui-generis" stylistic accomplishment. Review: by Kevin Begin, a musician from Dayton, Ohio Stephen Esrati wrote a book that kept my interest from start to finish. I thought I was reading a non-fiction novel until I read the acknowledgements at the end. The story moves quickly starting at the planning stage of a military intelligence operation during WWII and finally focusing on the search for Nazi war criminals. The book has no slow sections, and as such, I was always engrossed with the material. What makes the book read like non-fiction must be the result of Mr. Esrati's dilegent research into the people and places that comprise this book. I highly recommend this book to anyone that loves adventure and the pursuit of justice.

A stroke victim, a mysterious woman from the past, and the fateful events from a half-century before drive this story of love, secrets, and Americans in China during the Second World War. In 1989, a stroke victim is brought to St. Matthews Care Facility in Albany, California, unable to speak or move. Lisa, a rebellious Chinese-American hospital intern, learns that his name is Quentin, he was born in Beijing to American missionary parents, and he has no next of kin. When a grandmotherly Chinese woman appears at his bedside and claims to have known him during the War, Lisa is left with more questions than answers. The woman's strange disappearance after Quentin's untimely death sends Lisa on a lifelong search: why did Quentin's former lover need to see him one last time? 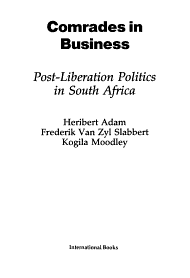 This taboo-breaking study of the New South Africa was published byTafelberg in South Africa earlier this year, and now, worldwide by International Books. 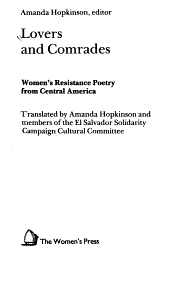