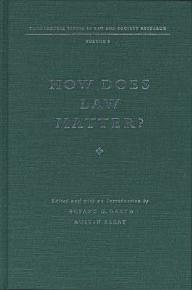 The question of how law matters has long been fundamental to the law and society field. Social science scholarship has repeatedly demonstrated that law matters less, or differently, than those who study only legal doctrine would have us believe. Yet research in this field depends on a belief in the relevance of law, no matter how often gaps are identified. The essays in this collection show how law is relevant in both an instrumental and a constitutive sense, as a tool to accomplish particular purposes and as an important force in shaping the everyday worlds in which we live. Essays examine these issues by focusing on legal consciousness, the body, discrimination, and colonialism as well as on more traditional legal concerns such as juries and criminal justice.

For many years now, there has been a strong economic scholarship pointing to the importance of institutions in general - and, more particularly, legal rules and the rule of law - for economic development. The importance of law for economic growth has also been empirically tested in many well-known and often cited studies. These studies seem to indicate not only that law is relevant in the development of countries and their economic growth in particular, but more specifically, that particular legal systems do better than others. The tenant of this scholarship (especially initiated by Andrej Schleifer and others) is that the common law would be a more efficient system in promoting economic growth than the civil law. However, many scholars doubt the empirical claim of this and criticize these findings, both on methodological grounds as well as on grounds of a misconception of differences between the civil and the common law. The interest in legal origins for the efficiency of the legal system also focuses on particular legal regimes, such as accident law, environmental law, or corporate law. Increasingly, the question is also asked whether legal institutions and the rule of law are also important in the process whereby poor nations develop their economy. For example, Cooter, Schafer, and Ulen have attempted to examine why particular developing countries do relatively better than others and, roughly speaking, also attribute (part of the) success of some developing countries to legal institutions. However, others (more particularly Ulen) point at the fact that legal rules may play some role, but perhaps only a modest role in economic development. A powerful example which is quoted in that respect is the one of China which, at least at first blush, does not seem to rely strongly on legal institutions (at least in the traditional sense) and nevertheless has experienced a spectacular economic growth. The particular case of China hence remains somewhat puzzling in this debate. So far, these various streams of literature paying attention to the question to what extent legal origins matter for economic growth have not been strongly integrated and have, to a large extent, been developed in separate social sciences (institutional economics, development economics, and comparative law). This multi-disciplinary book brings these approaches together in an integrated and structural manner. (Series: Ius Commune Europaeum - Vol. 100) 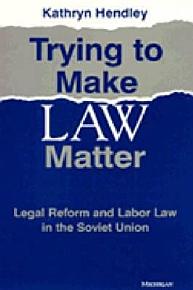 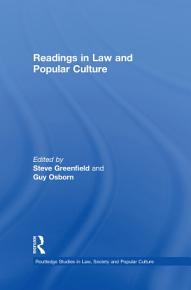 Readings in Law and Popular Culture is the first book to bring together high quality research, with an emphasis on context, from key researchers working at the cutting-edge of both law and cultural disciplines. Fascinating and varied, the volume crosses many boundaries, dealing with areas as diverse as football-based computer games, Buffy the Vampire Slayer, digital sampling in the music industry, the films of Sidney Lumet, football hooliganism, and Enid Blyton. These topics are linked together through the key thread of the role of, or the absence of, law - therefore providing a snapshot of significant work in the burgeoning field of law and popular culture. Including important theoretical and truly innovative, relevant material, this contemporary text will enliven and inform a legal audience, and will also appeal to a much broader readership of people interested in this highly topical area. 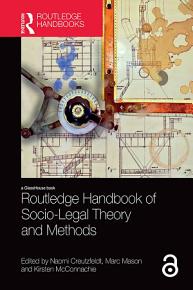 Drawing on a range of approaches from the social sciences and humanities, this handbook explores theoretical and empirical perspectives that address the articulation of law in society, and the social character of the rule of law. The vast field of socio-legal studies provides multiple lenses through which law can be considered. Rather than seeking to define the field of socio-legal studies, this book takes up the experiences of researchers within the field. First-hand accounts of socio-legal research projects allow the reader to engage with diverse theoretical and methodological approaches within this fluid interdisciplinary area. The book provides a rich resource for those interested in deepening their understanding of the variety of theories and methods available when law is studied in its broadest social context, as well as setting those within the history of the socio-legal movement. The chapters consider multiple disciplinary lenses – including feminism, anthropology and sociology – as well as a variety of methodologies, including: narrative, visual and spatial, psychological, economic and epidemiological approaches. Moreover, these are applied in a range of substantive contexts such as online hate speech, environmental law, biotechnology, research in post-conflict situations, race and LGBT+ lawyers. The handbook brings together younger contributors and some of the best-known names in the socio-legal field. It offers a fresh perspective on the past, present and future of sociolegal studies that will appeal to students and scholars with relevant interests in a range of subjects, including law, sociology and politics. 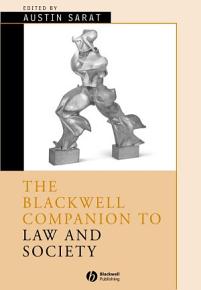 The Blackwell Companion to Law and Society is an authoritative study of the relationship between law and social interaction. Thirty-two original essays by an international group of expert scholars examine a wide range of critical questions. Authors represent various theoretical, methodological, and political commitments, creating the first truly global overview of the field. Examines the relationship between law and social interactions in thirty-three original essay by international experts in the field. Reflects the world-wide significance of North American law and society scholarship. Addresses classical areas and new themes in law and society research, including: the gap between law on the books and law in action; the complexity of institutional processes; the significance of new media; and the intersections of law and identity. Engages the exciting work now being done in England, Europe, Australia, and New Zealand, South Africa, Israel, as well as "Third World" scholarship. 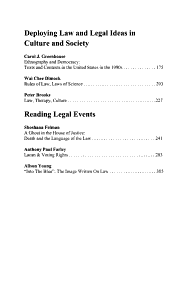 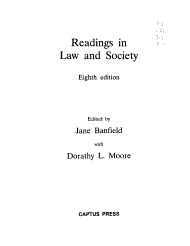 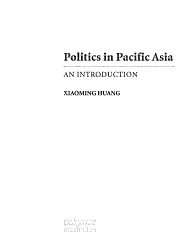 Using China, Japan, Korea, Taiwan, Singapore, Malaysia, Thailand, Indonesia and the Philippines as core examples throughout, this major new text provides a comprehensive, up-to-date and very accessible introduction to the politics of an increasingly significant and dynamic region of the contemporary world. 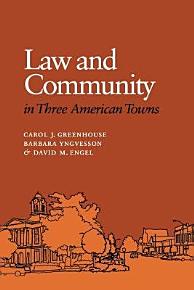 Carol J. Greenhouse, Barbara Yngvesson, and David M. Engel analyze attitudes toward the law as a way of commentating on major American myths and ongoing changes in American society. 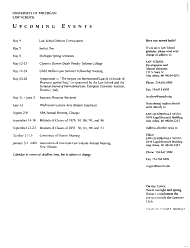