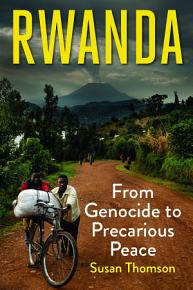 A sobering study of the troubled African nation, both pre- and post-genocide, and its uncertain future The brutal civil war between Hutu and Tutsi factions in Rwanda ended in 1994 when the Rwandan Patriotic Front came to power and embarked on an ambitious social, political, and economic project to remake the devastated central-east African nation. Susan Thomson, who witnessed the hostilities firsthand, has written a provocative modern history of the country, its rulers, and its people, covering the years prior to, during, and following the genocidal conflict. Thomson's hard-hitting analysis explores the key political events that led to the ascendance of the Rwandan Patriotic Front and its leader, President Paul Kagame. This important and controversial study examines the country's transition from war to reconciliation from the perspective of ordinary Rwandan citizens, Tutsi and Hutu alike, and raises serious questions about the stability of the current peace, the methods and motivations of the ruling regime and its troubling ties to the past, and the likelihood of a genocide-free future. 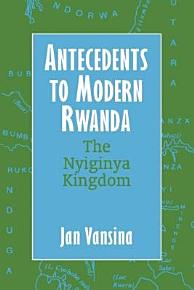 To understand the genocide and other dramatic events of Rwanda’s recent past, one must understand the history of the earlier realm. Jan Vansina provides a critique of the history recorded by early missionaries and court historians and provides a bottom-up view, drawing on hundreds of grassroots narratives. He describes the genesis of the Hutu and Tutsi identities, their growing social and political differences, their bitter feuds, revolts, and massacres, and the relevance of this dramatic history to the post-genocide Rwanda of today. 2001 French edition, Katharla Publishers 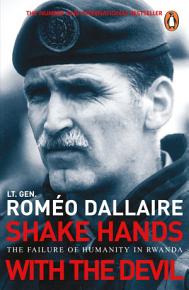 THE NUMBER ONE INTERNATIONAL BESTSELLER WINNER OF THE GOVERNOR GENERAL'S AWARD 'Indisputably the best account of the whole terrible Rwandan genocide.' R. W. Johnson, Sunday Times 'Angry, accusatory and extremely moving.' Caroline Moorhead, Spectator When Lieutenant General Roméo Dallaire received the call to serve as force commander of the UN mission to Rwanda, he thought he was heading off to Africa to help two warring parties achieve a peace both sides wanted. Instead, he and members of his small international force were caught up in a vortex of civil war and genocide. Dallaire left Rwanda a broken man; disillusioned, suicidal, and determined to tell his story. An award-winning international sensation, Shake Hands with the Devil is a landmark contribution to the literature of war: a remarkable tale of a soldier's courage and an unforgettable portrait of modern warfare. It is also a stinging indictment of the petty bureaucrats who refused to give Dallaire the men and the operational freedom he needed to stop the killing. 'I know there is a God,' Dallaire writes, 'because in Rwanda I shook hands with the devil. I have seen him, I have smelled him and I have touched him. I know the devil exists and therefore I know there is a God.' 'Read Roméo Dallaire's profoundly sad and moving book.' Madeleine Albright, Washington Post 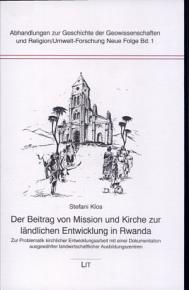 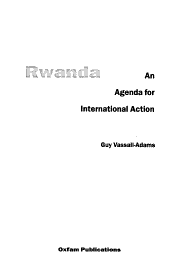 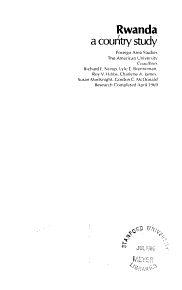 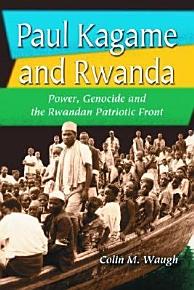 In 1994, ethnic conflict turned to genocide in Rwanda. When the world finally took notice, a million people lay dead, and the small African country lay in ruins. Rwanda returned from the brink guided by rulers determined to rebuild the country on their own terms, rather than those of a previously indifferent international community. Paul Kagame, Rwanda's first democratically elected president, embodies the new Rwandan political philosophy. Young, unconventional, not without flaws and critics--Kagame is key to understanding Rwanda's transition from a country that had known only fear, division and clan-based nepotism for many years to an exceptional African state built upon traditional order and values. Paul Kagame's life--from exiled child refugee, to guerilla warrior and rebel politician, to President of Rwanda--is traced in this exploration of the influences on Rwanda's struggle for change. Analyzing the conflicts and challenges of post-genocide Rwanda in comparison to modern parallels, the work invites reassessment of Kagame's leadership and government in an African context rather than measurement against Western standards, and critiques Western involvement in Rwanda since the early 1990s. Twenty-eight photographs and three maps supplement the text, as do a history of Rwanda's Banyarwanda people and a glossary of words in Kinyarwanda, their language. The work includes a bibliography and an index. 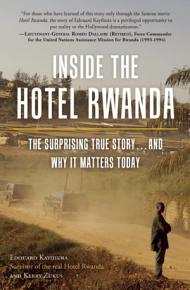 A survivor of the 1994 Rwandan genocide reveals what really went on at the famed Hotel des Mille Collines. In 2004, the Academy Award–nominated movie Hotel Rwanda lionized hotel manager Paul Rusesabagina for single-handedly saving the lives of all who sought refuge in the Hôtel des Mille Collines during the genocide against the Tutsi in 1994. Because of the film, the real-life Rusesabagina has been compared to Oskar Schindler. In this first-person account, survivor Edouard Kayihura tells his own personal story of what life was really like during those harrowing days within the walls of that infamous hotel, and offers the testimonies of others who survived there, from Hutu and Tutsi to UN peacekeepers. In the wake of Hotel Rwanda’s international success, the author reveals, Rusesabagina is one of today’s most well-known Rwandans—but has become the face of the very Hutu Power groups who drove the genocide. He is accused by the Rwandan prosecutor general of being a genocide negationist and funding the terrorist group Democratic Forces for the Liberation of Rwanda (FDLR). This book exposes the Hollywood hero as a profiteering and politically ambitious Hutu Power sympathizer who extorted money from those who sought refuge, threatening to send those who did not pay to the génocidaires, despite pleas from the hotel’s corporate ownership to stop. Inside the Hotel Rwanda is at once a harrowing memoir, a critical deconstruction of a heralded Hollywood movie, and a political analysis aimed at exposing a falsely created public image. 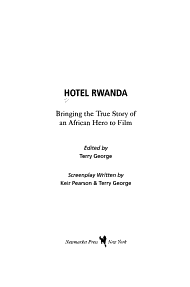 The official companion book, edited by director Terry George, including essays on the history of the genocide, the complete screenplay written by Keir Pearson & Terry George, and more than 70 photographs. A Story That Had to Be Told: In 1994, as his country descended into madness, Paul Rusesabagina, the hotel manager of a Belgian-owned luxury hotel in Kigali, the capital of Rwanda, used cunning and courage to save 1,268 people from certain death while the rest of the world closed its eyes. His real-life story inspired the Oscar® -nominated writer of In the Name of the Father, Terry George, to make the extraordinary film, Hotel Rwanda, starring Don Cheadle, Sophie Okonedo, Joaquin Phoenix, and Nick Nolte, which has received accolades from critics and moviegoers alike, winning numerous awards. Now, in the only official companion book, comes the fascinating filmmaking story, with first-person pieces by Terry George and co-screenwriter Keir Pearson about their three-year struggle to gain support and financing, as well as a brief history of Rwanda with details on the actual events portrayed in the movie. Illustrated with more than 70 historical and contemporary photos and movie stills, the book also includes journalist Nicola Graydon's report on joining Paul Rusesabagina when he first returned to Rwanda on the tenth anniversary of the genocide; writer Anne Thompson's personal journal of her visit to the set in Africa during production in February 2004; and a compelling transcript of the PBS Frontline documentary revealing the afterthoughts of officials who chose not to listen to the cries for help. In addition there is a timeline of the crisis, a further reading and viewing list, and the complete screenplay. 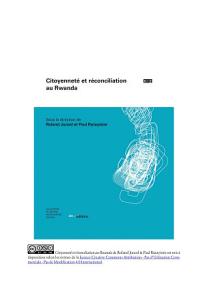 This action research jointly undertaken by the Center for Conflict Manage-ment in Butare and the Haute Ecole de Travail Social in Geneva aims at analysing and supporting pilot experiences by community actors in post-genocide Rwanda. Such experiences are analysed through dialogs involving field actors, Rwandan and Swiss researchers. Special attention is paid to managing conflicts related to identity and memory and rebuilding social solidarity among citizens. Expected benefits include training of field actors and those involved in reconciliation work in general. 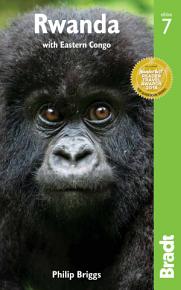 Now into its seventh edition and written by Philip Briggs, the world's leading writer of guidebooks to Africa, Bradt's Rwanda has been the go-to guide for visitors to this historical and resurgent 'Land of a Thousand Hills' for nearly two decades, and it continues to be in a class of its own when it comes to in-depth information on this emerald slice of East Africa. With freshly researched and updated details on developments across the country, Bradt's Rwanda includes up-to-date maps of rapidly modernising Kigali, information on hiking to the summit of Mount Bisoke and a newly expanded chapter on excursions into the neighbouring DRC. In this new edition are extensive and recently updated maps and natural history information, details of kayak and canoe excursions on Lake Kivu and the Mukungwa River, all you need to know about tracking not only mountain gorillas in Rwanda's Volcanoes National Park but also lowland gorillas in the Congo, and information about overnight stays on tea plantations at Sorwathe or Gisovu. Also covered are Nyungwe Forest National Park, where a wealth of endemic birds and primates inhabit the largest surviving montane forest in East Africa; Nyanza, where the hilltop Rukari Palace Museum marks the site of the old mwami's (king's) palace; and the National/Ethnographic Museum of Rwanda, the top cultural site in Rwanda's second city, Huye (Butare). Coverage of nearby cities and national parks in the neighbouring DRC has been expanded since last edition, providing all the necessary information to take an excursion into Rwanda's enormous and poorly understood neighbour. Rwanda continues to change and develop at an unprecedented pace, and there's hardly a more accessible part of Africa to be found anywhere on the continent. It's no less intriguing for the convenience, however, and Rwanda's superlative natural attractions seem to improve by the day, with growing animal populations and an on-going rhino reintroduction program in Akagera National Park. Having now gone through nearly 18 years of editions, Bradt's Rwanda is not only the most in-depth guide available, but also the guide with the longest history in the country itself. 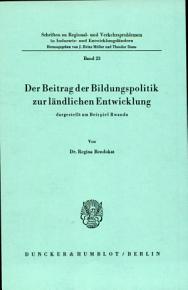